skip to main | skip to sidebar

It's been almost two years since I last posted. The reason being twofold. First being that I got burned out on writing, just lost interest and had fewer good stories to post about. It happens to most writers I think. While the adventures are fresh and exciting it's easy to sit down and write. But my adventures were getting fewer and further apart and most were just the same thing being repeated. Occasionally something new would happen in Linda and my life and it was fun to share those. But then our adventures became either routine or they were happening without the other of us being involved. 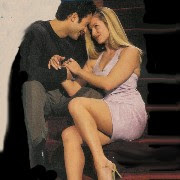 And that's what happened with Linda and I. She was having more and more adventures that didn't involve me in any way, other then sitting at home waiting for her return. And then her return started to happen less frequent. Linda is now living with a new boyfriend, one that has little or no interest in me and my sissy lifestyle. So she had a choice to make and decided to give herself over to the new guy.
We still see each other every few weeks and still profess our love for one another. But her desires are now being satisfied by the new man in her life.
I also have a new boyfriend that enjoys pushing my limits and testing me. One of those tests ended up outing me to my co-workers so pretty much everyone I know now knows that I am a crossdressing sissy. That has cost me most of the few friends that I had so I find myself spending all of my time with my boyfriend.
I am happy. Linda is happy. I miss her but I don't see us ever returning to the way things were. And we both realize that our lifestyles no longer mesh with the others. So we have moved on, hers by choice and mine because I had no choice.
Thanks for those who have enjoyed my posts and asked for more. I'm sure all have moved on and found other posts more interesting then mine.
Beverly
Posted by Beverly at 9:53 AM

Hi Beverly
so sorry to hear about yo and linda splitting up, i can tell from your writing how much she means to you.
on a positive note, you have a new boyfriend who you can appreciate and love as a girl without any reservations. finally living as Beverly.

i am also saddened to hear that this will be the end of the blog. i for one had not given up hope on you returning and i have really enjoyed your blog, and i have read every post, many more than once.

for the record my favourite post was the time you gave a quicker blow job than Linda and had the bed in the boat. it was funny and exciting!!!

Losing some close friends/colleagues can be a struggle, but you may find that in time they are the ones who are afraid.

if you do ever start to write again, you will have least one person reading it.

Beverly I am so sad to hear about the split in your marriage....the sissy cuckold lifestyle is so very hard to maintain and sometimes people just grow apart.....no matter how much you don't want it to happen....
I am really glad to hear you're in a new relationship and that you're happy...
Remember that friends who abandon you just because of what you are inside probably were never real friends to begin with!!!
I am sorry to hear that you're not going to be blogging anymore....I was always hoping you'd come back and I want to thank you for at least coming back even if it was just to say goodby....

I wish you lots of love and luck and health and happiness in your life.
Love and Kisses
Kaaren

i am so sad. Please keep your blog open, just in case.... The urge to write may return. i hope it does.

Also, please write to me if you care to. i would enjoy that.

sissy terri, I am planning on keeping my blog open. Who knows, maybe the urge to write again will strike me. Let's keep in touch.
Beverly

Your blog is the BEST one I've ever read, and I have followed quite a few. Please keep on writing. I'd love to hear the details about when you were outed

An update was unexpected but appreciated. I think it's time you ditched the sissy crossdresser identity and just transition. I remember your updates years ago, you were already out to your friends, family, and neighbors. You already live as a woman anyway, it's time to embrace it full time.

If you've lost the commitment to blogging, consider Twitter. It's a lot more causal, conversational, and I'm sure you'll find lots of like minded folks who will support you too. Anyhow, I guess the blog should be titled, "All His" now.

Best of luck for the future.

Like others, I'd love to continue to hear about what goes on in your life.

By all means let's keep in touch. My email should be available on my blog...please write :)

Just to add to the list of followers that enjoys your stories. I too enjoy your musings. Your stories may be mundane to you. They are inspirational for me. I look forward to future posts.

I too lost my "Mistress" after a lasting relationship(marriage) went sour after I got disabled. We still love one another, but the physical / intimate part is ... gone. Very disturbing. However, I do feel for you! Life does go on, and we should be just too happy to wake up alive. Waking up dead would ruin my whole day!

It is mid September of 2017. Just wanted you to know that I checked your blog hoping there was a new post. I would enjoy what life is like with you. What life is like at home, work and play.

I will give you very, very specific stroking instructions utilizing fingers, palm, one hand and two, for the most explosive result. Goddess Alexandra Snow Clips

I was thinking about your blog this morning and the wonderful stories. Alas nothing new. If nothing else, know that someone out in the blogosphere still wishes you happiness, love and support. Hope you are doing well.

Beverly
Iowa, United States
I enjoy being my wife's housewife; cooking, cleaning, taking care of all her needs as she helps me explore my feminine side. Whatever she needs, I am ALL HERS.